HPV PREVENTION AT A GLANCE

Here we summarize some key issues of HPV disease and its prevention to the medical and public health communities. For a general overview visit: WHO 2015 , CDC (USA). 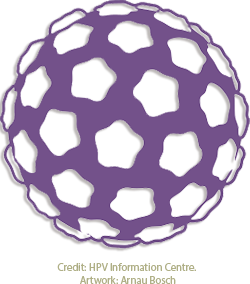 Infection with human papillomavirus (HPV) is recognized as one of the major causes of infection-related cancer worldwide, as well as the causal factor in other diseases. The International Agency for Research on Cancer has established strong evidence for the causal aetiology of HPV and cancers of the cervix uteri, penis, vulva, vagina, anus and oropharynx.

Available HPV vaccines can prevent cervical cancer and other HPV- related diseases. Countries are encouraged to introduce routine HPV vaccination into their health programmes and to create the necessary conditions for successful implementation.

A range of screening and treatment protocols prevent cervical cancer in women already infected with HPV. Investment in these programmes is encouraged to reduce premature death from cervical cancer. Several screening tests exist (HPV testing, cytology, VIA). Data from clinical trials indicate that HPV based screening in women above the age of 30 is the most effective alternative.

Countries are strongly encouraged to offer well organised and appropriate vaccination and cervical cancer screening programmes. Comprehensive efforts in cervical cancer prevention can be cost effective in a wide range of national economies.

The natural history of HPV and cervical cancer

Cervical cancer is the rare, end-stage of an unresolved HPV infection, currently defined as persistent presence of HPV DNA in repeated testing of cervical specimens.

In many industrialised countries the prevalence of HPV infections in young adult females can range between 30% and 80%, and the lifetime probability of ever encountering HPV is as high as 80-90%. Most of these infections clear spontaneously without clinical signs or symptoms.

The fraction of persistent carriers of HPV in the middle ages is estimated to be in the range of 4-10% and these women are the true high-risk group for cervical cancer and probably for any other HPV-related cancer.

The time lag between the peak of HPV infection and the peak of cancer incidence is two to four decades, making the initiating infections and precursor lesions of cervical cancer an appropriate target for screening and early detection. Despite significant gaps in knowledge, cervical cancer is the best understood of all cancers and model system for carcinogenesis.

The global prevalence of HPV infection in women with normal cytology is around 11-12%, with the highest prevalences in sub-Saharan Africa (24%), Eastern Europe (21%) and Latin America (16%). Maximum rates of HPV prevalence are observed in women less than 25 years, declining in older ages in many populations, some of which have a secondary peak in peri-menopausal or early menopausal women.

Prevalence increases in women with cytologic cervical pathology in direct proportion to the severity of the lesion, reaching around 90% in women with cervical intraepithelial neoplasia (CIN) grade 3 or invasive cervical cancer. Careful retrospective investigations have shown that nearly 100% of all cervical cancer is HPV positive. Notably, the proportion of HPV-positive women in whom HPV16 is detected greatly increases with lesion severity.

Among all existing types of HPV only a few cause cancer. HPVs 16 and 18 are responsible of the 70% of cervical cancers worldwide. HPVs 31, 33, 35, 45, 52, and 58 are responsible of another 20% of cases. These proportions are globally constant across all world regions.

In head and neck cancers, the prevalence of HPV DNA varies greatly by oropharyngeal cancer, where HPV DNA has been found in 35-50% in developed countries in contrast with the rest of the oral cavity, where HPV DNA is found in 5-15% of the cases.

Among the non-cancerous HPV-associated preventable conditions, genital warts and recurrent respiratory papillomatosis are unequivocally linked to HPV6 and 11. 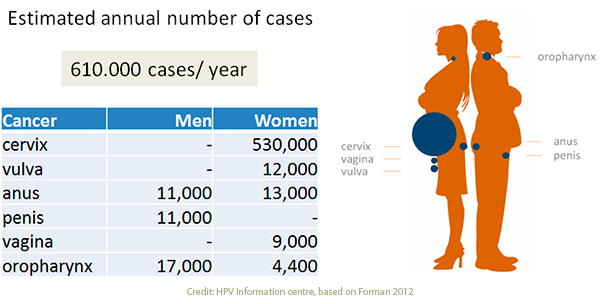 Cervical cancer, for which is assumed that all cases are related to HPV, is the fourth most common female cancer worldwide, with 528,000 estimated new cases in 2012, of which approximately 86% occurred in less developed regions. The other five HPV-related cancer types (vulva, vagina, anus, penis and oropharynx) accounted for 80,000 cancer cases more.

There is a well-characterized and strong association between cervical cancer incidence and level of development. Incidence and mortality rates tend to be at least four-fold higher in countries with a low Human Development Index ( HDI)compared with very high HDI countries. A similar pattern is observed for 5-year relative survival, with less than 20% in low HDI countries and more than 65% in very high HDI countries. Global maps of cervical cancer rates show patterns of variation largely consistent with level of HDI. 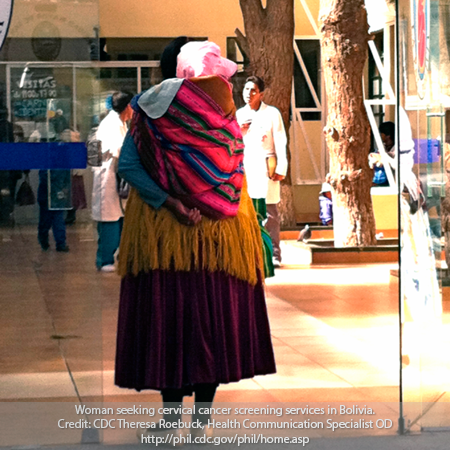 The discovery of HPV as the necessary cause of cervical cancer has led to important technological advances, including the development of molecular tests for HPV to identify women with precancerous cervical lesions.

Currently, there are 3 types of screening tests available:

Cytological screening for cervical cancer precursors has been very successful in countries where adequate resources exist to ensure high quality and good coverage of the population at risk. Mortality reductions in excess of 50% have been achieved in many developed countries; however the procedure is generally inefficient and unworkable in many parts of the world where the appropriate infrastructure is not possible.

Substantial evidence exists to support the idea that HPV testing is advantageous both in triage of women with equivocal abnormal cytology, in surveillance after treatment of CIN lesions and in primary screening of women aged 30 years or older. However, the possible advantages offered by HPV-based screening require a well-organized program with good compliance with screening and triage policies.

VIA, despite all its limitations, may be used for screening premenopausal women in low-resource settings, where resources do not permit current HPV testing methods. 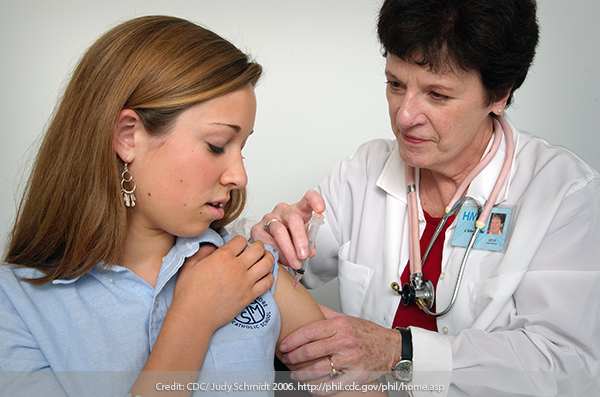 Since 2006, the quadrivalent and bivalent vaccines have been licensed in over 100 countries. The 9-valent vaccine has been approved by the FDA in 2014 and pre-approved by EMA in 2015.

Large trials have been conducted showing the safety, immunogenicity and high efficacy of the bivalent and quadrivalent vaccines in the prevention of pre-invasive lesions and infection, especially when administered at young ages; prior to HPV exposure. Trials of the 9-valent vaccine have also demonstrated the safety, immunogenicity and efficacy of the vaccine in the prevention of infection and disease associated with the vaccine's HPV types, and its potential to substantially increase the overall prevention of HPV-related diseases.

Post-licensure country reports have shown the recent and early beneficial impact of well implemented HPV vaccination programs, including decreases in the prevalence of vaccine HPV types and in the incidence of genital warts and high-grade cervical abnormalities.